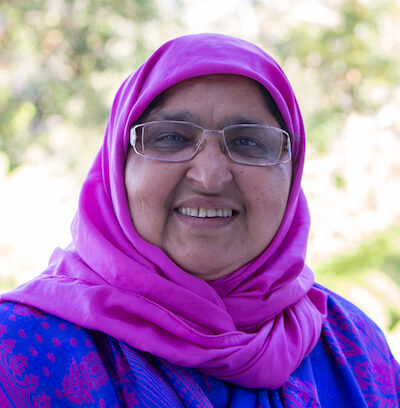 Mehar Ahmad based in Sydney is a Public School Teacher and President of Seena Inc, Publishers of the Australasian Muslim Times AMUST.

I was born in East Pakistan (now Bangladesh) and have very fond memories of my childhood.  The new state of Pakistan with its far flung Western and Eastern wings came into being after India gained independence from the British Raj in 1947.  My parents migrated from India to East Pakistan in 1953 and settled in Dhaka (Dacca).  East Pakistan separated from Pakistan to become an independent country, Bangladesh in 1971.

My dad, Ali Hussain Siddiqui was an entomologist and he worked in the Department of Plant Protection. He had a great passion of cooking. I remember when he returned from USA after completing his Masters in 1962, he brought an electric oven. He used to cook hunter beef, lamb roast and many other food items using the oven and used to involve me in his cooking. He taught me how to make dough to make roti when I was hardly 10.

As I was growing up, I learned the cooking skills from him. Now I realise that I have inherited my passion of cooking from my dad. He taught me how to make different kinds of meat dishes – biryani, yakhni pulao, murgh musallam (roasted chicken with almonds and aromatic spices) – and many various kinds of sweets, including the popular Eid day dish, qemami sawain, which is a family favourite with my daughters and grandchildren.

Mentioning Eid takes me back to the month of Ramadan in my childhood, when I started my fasting around the age of 7.  As a little girl I was fascinated how my parents were fasting the whole day and as soon as we heard the Azan (call for Maghrib prayer) we broke our fast (Iftar) with dates and shikan Jabeen (homemade lemonade without soda), samosa, phoolki, ghoogni and kachaloo.

Fasting only become mandatory after puberty around the age of 12 or 13 but most children start fasting at a much earlier age in order to emulate their parents. The first few years of fasting were difficult but slowly it became easier to fast the whole day.

Cooking towards the last few hours of fasting were always very tempting. The aroma of samosas frying was just irresistible. The clock seemed to slow down and I kept asking my dad if it was time yet to break the fast? My dad used to say to read the Quran and the time will move fast. And he was so right. As soon as I felt hunger pain or was hit by the aroma of samosa, I opened my Quran and kept on reciting till Iftar time.

The Muzzin’s call for the prayer was the sweetest voice I longed for because I knew it was then time to break my fast. The dinner table would be full of different items but I broke my fast with dates, shiken jabeen fresh lemonade and then went straight for the samosas.

Samosa is a popular entree appetiser served in households and restaurants during special occasions such as weddings, birthdays, anniversaries and of course during Ramadan. A baked or fried pastry filled with savoury filling such as mincemeat, spiced potato or mincemeat and potato together, it takes different shapes such as triangular or moon shape according to the region it is made in South Asia.

During Ramadan, Samosa is the most wanted street food. People who can’t make or don’t want to make it at home just go out and buy the samosas from street food vendors.

Initially, I thought that Samosa originated in India, but later I found out that it actually took its name from Sambosak, the little pies and pastries which originated in the Middle East and were introduced to the Indian sub-continent in the 14th century by travelling merchants .

Samosa pastry is traditionally made with dough which takes a long time to prepare, but now as a result of cultural fusion, making Samosas is a lot easier. No more kneading dough. Spring roll pastry that you find in the shops is simply cut into stripes, filled with the various fillings, folded into triangular shapes, then fried or baked. Really easy and ready in no time.

Making Samosa with puff pastry is closer to the real Indian Samosa but much easier. Cut the pastry in circles using a small quarter plate then divide into semi-circles by cutting in half. Put the fillings in, then press the top flap of the cone and fry. The triangular wonder is ready!

The best part is that if you are health-conscious and don’t want Samosa fried, you can just bake or air-fry (using an air-frier compared to a deep frier using oil) these beauties and enjoy lower calorie, lower cholesterol Samosas.

I normally use the large spring roll packet that comes with 30 sheets. Cut the sheets into 3 strips, separate the sheets and then fill with the filling. Although making of the samosa with these sheets needs mastering some cutting and filling skills and experience.

When the samosa are made, the end flap of the sheet is stuck by brushing the flour and water paste on the flap. If you are using puff pastry that doesn’t need anything to stick. You just need to press the opening so the filling cannot come out.

Both type of Samosa can be made and put in the freezer to be cooked later. For the puff pastry Samosa, you won’t need to thaw it. You directly bake in the oven or in the the air fryer.

Samosa made with spring roll pastry can be fried frozen. Just make sure that the oil is not smoky hot otherwise the outer part of the Samosa will cook while the inside remains frozen. Once the oil gets little bit hot put the samosa in and cook on a medium flame. Once the Samsos start to become a little golden then you can put the flame high till it gets golden brown.

Passing on the cooking skills and recipes

As I mentioned earlier, I inherited my passion for cooking from my dad. I love trying new things and cooking for the family and friends as my dad did. He had his recipe book but now it is so faded that I am unable to read his writing.

I haven’t written my recipes as yet. But it is is in the making. My youngest daughter, Rubinah hangs around the kitchen and writes the ingredients and the measurements while helping me with cooking. So basically she is writing my recipes and who knows one day I will come up with my own recipe book.

I have been cooking with daughters as my dad did with me. Rubinah has been helping me to make the Gulab jamun, a divine sweet and now she has become a pro in making this dish. I am now passing my passion of cooking to my grandson Eesa, 11, who is already a great cook in the making.

Eesa loves Samosa and was keen to help me to make the samosa for this Ramadan.

You will find step by step instructions on making Samosa in a video (coming soon) together with the recipe.

So try to make samosa. If Eesa can make it, you can too.

For the filling mixture

The filling can used in three different ways to make the samosas.

If you have left over filling that can be used next time.

Baking in the oven

If you just want to fry 5 or 10 samosas, the rest can be placed in the freezer.  Whenever needed you can fry them straight from the freezer without thawing them.  When frying always make sure the oil is not too hot and fry on a medium flame.

You can buy the puff pastry from any supermarket.

Baking in the oven