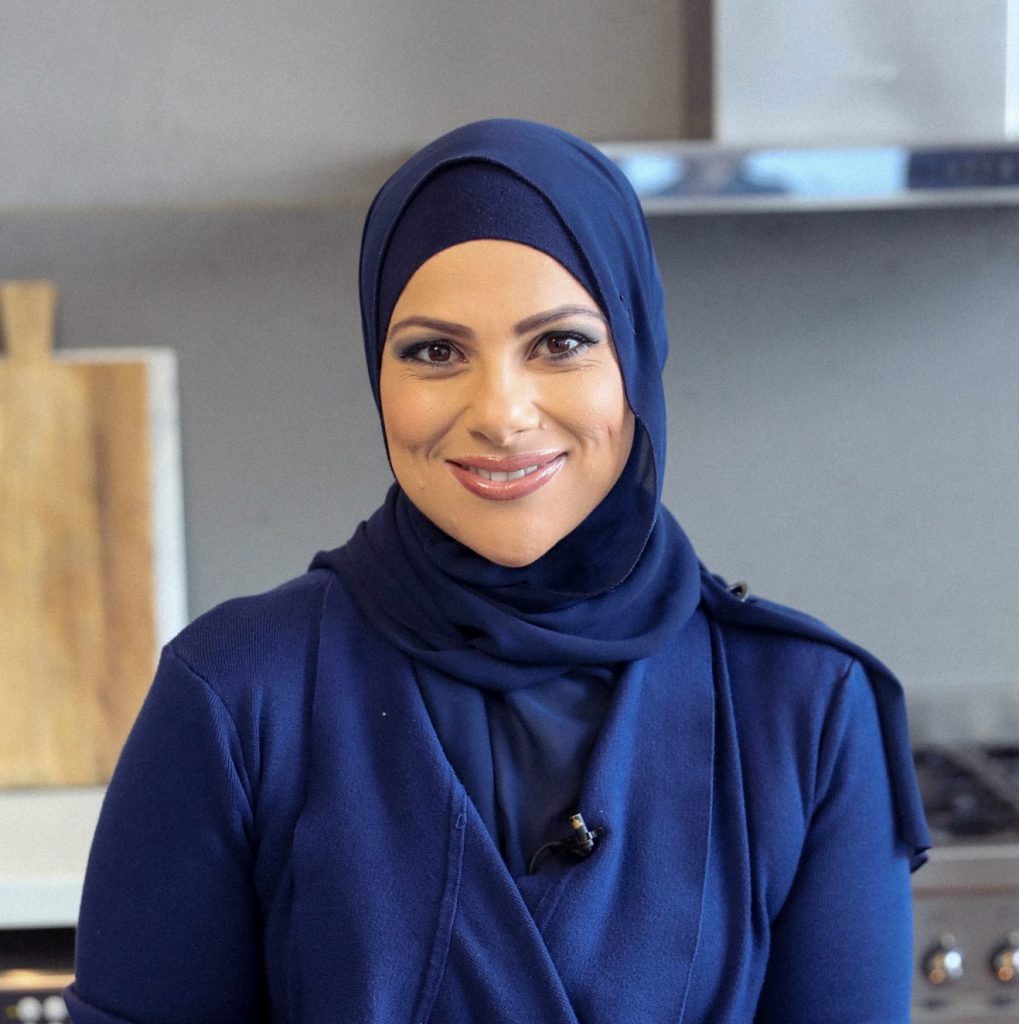 Both my parents have a really strong work ethic and worked hard in Sydney to build a life and ensure we all got a good education and they ended up owning a picture framing company which is really well-known in the community. (It’s the one by Nut Roasters on Chapel Street in Roselands in south west Sydney.)

A great example of this is my Znoud – a popular Lebanese pastry of crispy filo pastry stuffed with ashta which is a kind of Arabic clotted cream a bit like ricotta, mascarpone cheese or English clotted cream, sweetened with a little bit of sugar and rose and orange blossom water and drenched in rose water syrup. Bizarrely in English, Znoud El Sitt translates to “the upper arms of a woman”!

Znoud is a very popular choice of dessert to bring to iftars during Ramadan, when you are invited to someone’s home to break the fast in the evening and it’s something I cook over and over throughout the month as a post-iftar treat with a cup of coffee or tea. But it’s usually not your standard Znoud. I experiment.

These days I make versions of Znoud inspired by everything from French eclairs to American apple pies; but the old school, traditional version of the dessert will always have a special place in my heart. It is flavoured with orange blossom and rose water and garnished with pistachio. That combination has stood the test of time, and the filling, ashta (Arabic clotted cream) will always be a source of nostalgia, no matter how many new versions I dream up.

My memories of the dessert go all the way back to childhood. My parents would buy searing hot Znoud from a local sweets / pastry shop. They loved to eat it that way: straight from the baker’s fryer.

I can also credit Znoud with another chapter in my life. It is the dish I made when auditioning for MasterChef in 2018 and I made it onto the show – so it has allowed me to progress on both TV, and in recipe development.

Remembering my parents buying just-fried Znoud from a local sweets shop and eating it hot and fresh, I decided what I wanted to do was to create it for the home-cook so that people at home can enjoy it as hot and fresh as my parents and I have always done.

I sell frozen packs online at www.hodahannaway.com.au – for pick up and soon to be delivery in the Sydney area – but I’m sharing the recipe here with you now so that wherever you are you can give it a go too. Have a look at the demonstration video for how to do it – and have fun! They really are something special and will have you hooked too!

They can be also be eaten at room temperature or cold so are also a great make-ahead dessert. 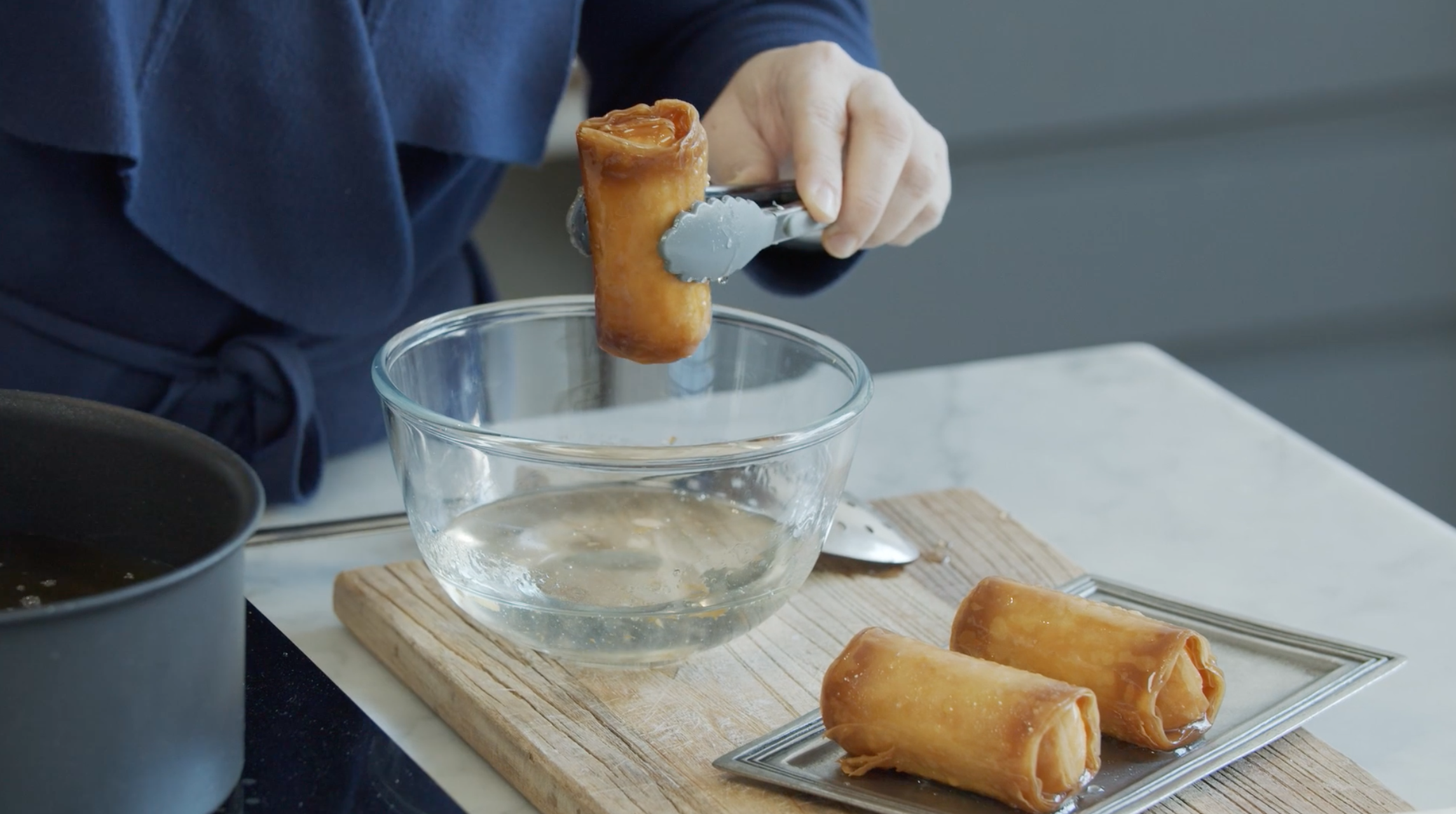 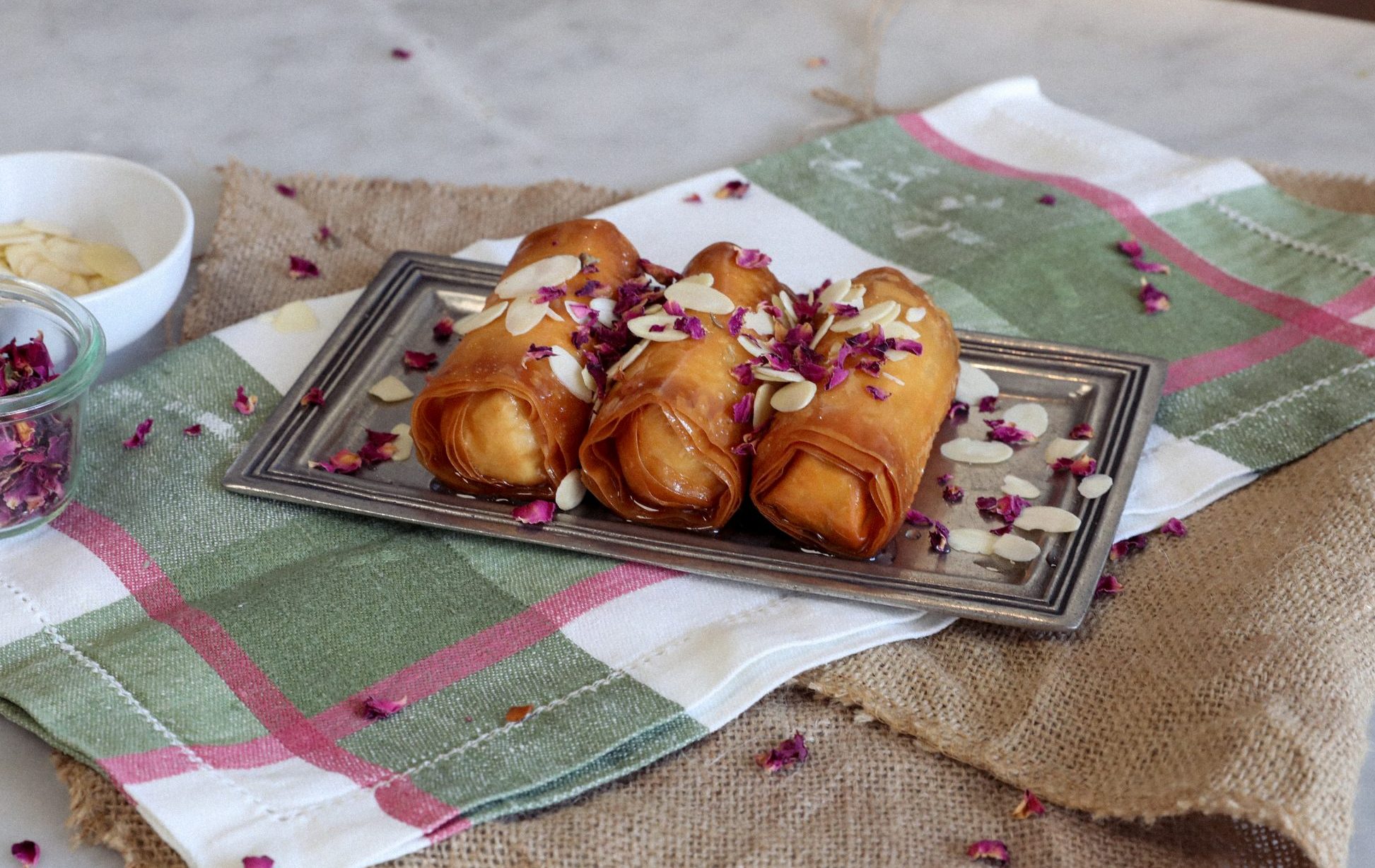 For the Rose Water and Orange Blossom Syrup, place sugar, lemon juice and water in a medium saucepan over high heat and stir until sugar has dissolved then continue to cook until the syrup comes to the boil.

Reduce heat to medium-low and allow the syrup to simmer for 6-7 minutes.

Remove from heat and stir in the rose water and orange blossom water, then set aside to cool.

For the ‘Ricotta’, place milk, vinegar, sugar, rose water and orange blossom water in a small saucepan over high heat and stir until sugar has dissolved. Continue to cook until curds begin to form, about 3 minutes. Sit a fine sieve over a bowl. Pour the curd into the sieve and allow the mixture to strain and cool down in the fridge.

For the Custard, mix the cornflour and water together in a small bowl until well combined. Place the milk, sugar, rose and orange blossom waters in a small saucepan, mixing until sugar has dissolved. Bring to a simmer, then add the cornflour water mixture and whisk vigorously until mixture thickens and coats the back of a spoon. Remove from the heat, transfer to a clean bowl and place in the freezer to cool down quickly.

Once the ricotta and cornflour custard have cooled, mix together in a bowl until well combined.

To Assemble, cut Fillo sheets into 6 cm strips, cover with a clean tea towel then set aside.

To cook the Znoud El Sitt, place canola oil into a wok and heat to 180C over a medium-high heat.

To assemble, lay 4 strips of phyllo horizontally in front of you on a clean work surface and place another strip across it vertically, creating a cross shape.

Place a tablespoon of the ricotta and custard mixture in the centre of the fillo, where the two strips cross over. Fold the side strips in to cover the filling and then roll the parcel to form a cigar shape, sealing the edges with a little water.

Working in batches, drop cigars into the hot oil and fry until golden brown, about 2-3 minutes. Drain pastries on a paper towel then immediately dunk into sugar syrup for 10 seconds, then place onto a paper-lined tray. 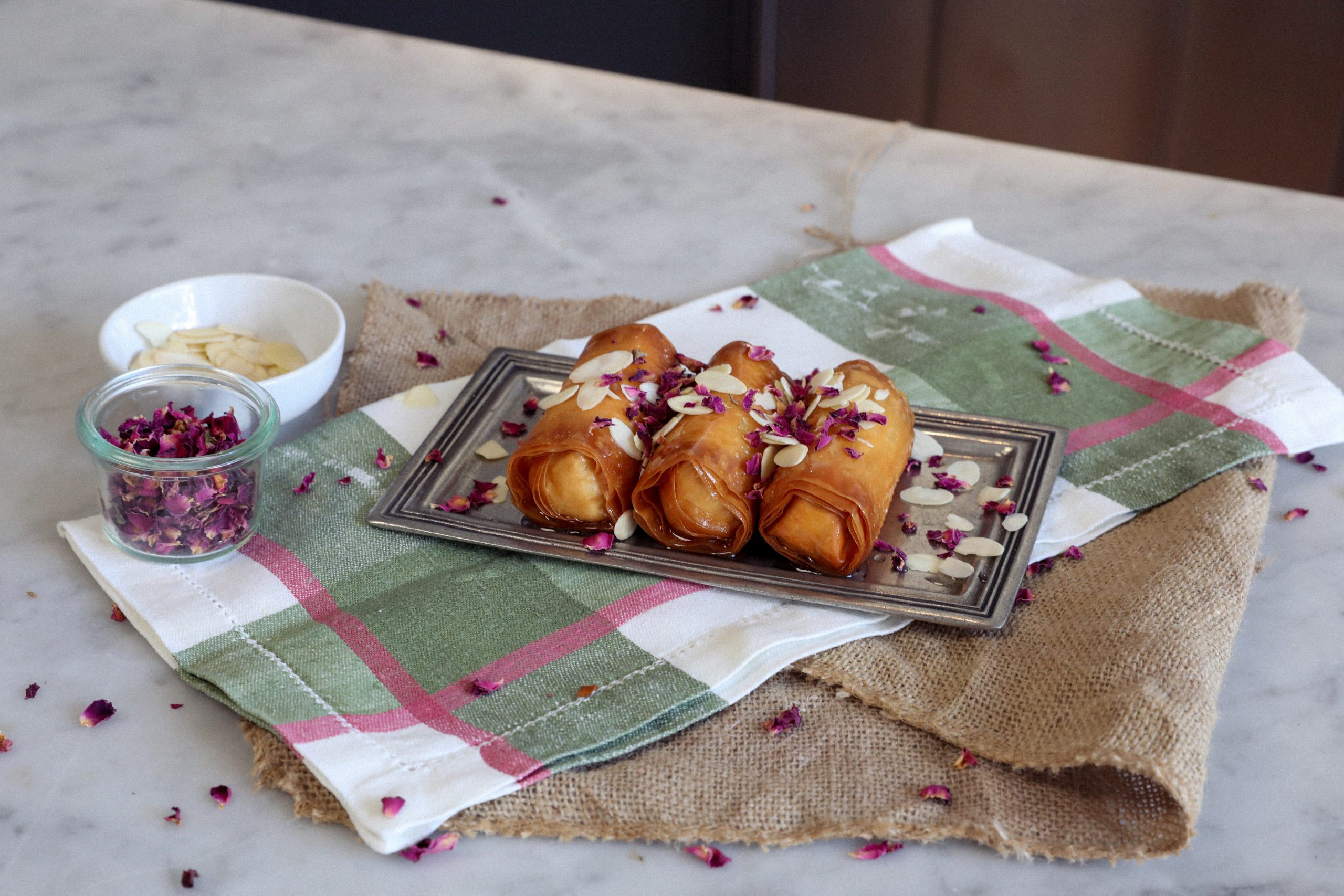 To serve, sprinkle edible rose petals and ground pistachio across pastries. Serve with a little extra syrup on the side. 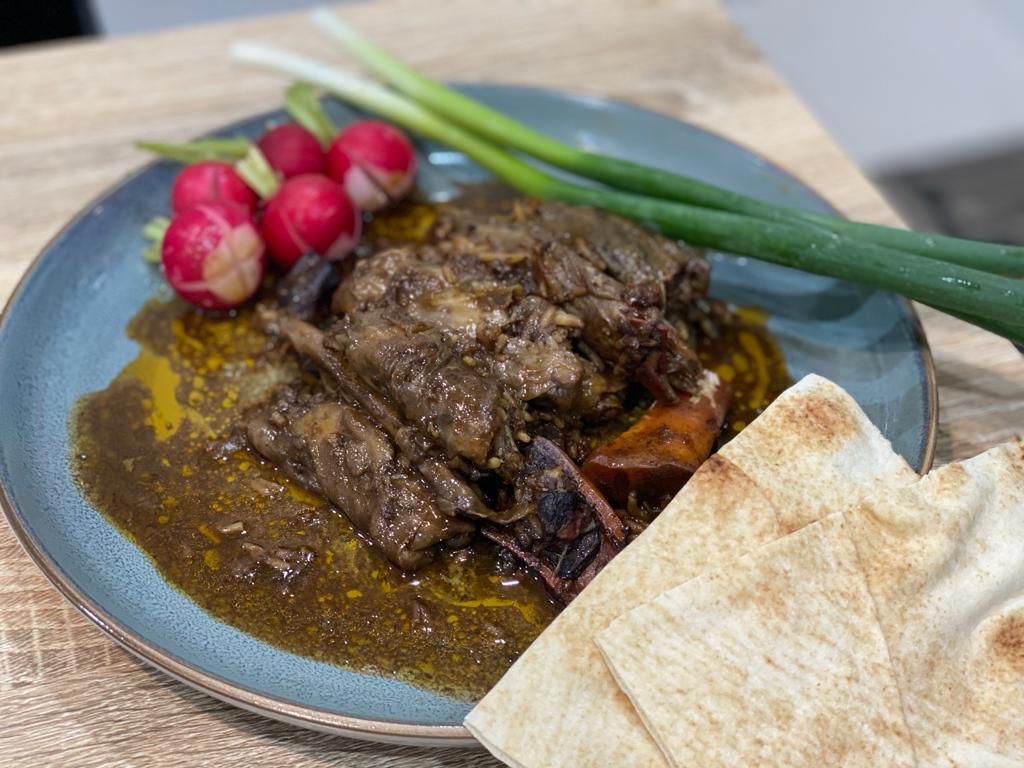 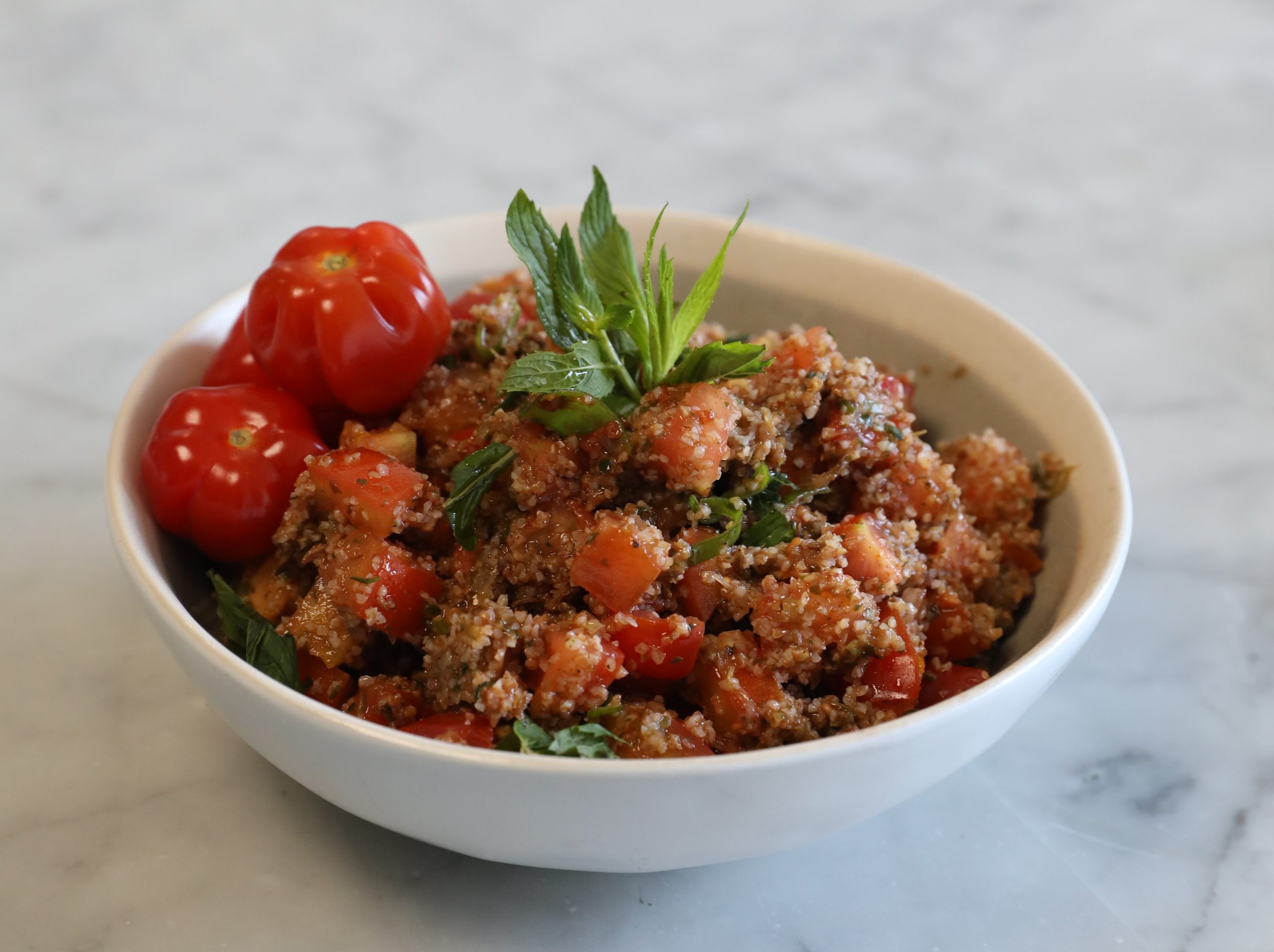