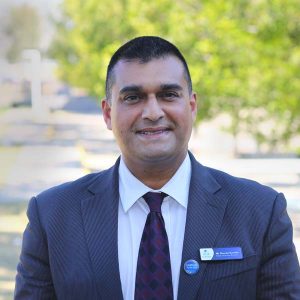 Osman Karolia, based in Sydney, is currently the Head of Community Engagement, at Unity Grammar Islamic School and Vice Chair of Islamic Schools Association of Australia.

I was born in Johannesburg South Africa. My family was originally from Gujarat in India but had lived in South Africa for four generations. English is my first language but my parents and older generations speak Afrikaans as it was compulsory in schools. The older generations including my  grandparents also spoke Guajarati which unfortunately very few of my generation or younger do.

I left South Africa in 1980 at the age of 8. Most of my family is still in South Africa though a few have moved to the UK, Ireland, Dubai, Canada, and the USA.

My mum divides her time between South Africa and Australia and is here in Sydney for a little longer now due to Covid 19 travel restrictions. This is a blessing as she is close to her children during this challenging time and it makes it easier for us to give her support and reassurance. Osman on his bike just prior to leaving South Africa, aged 8

One of my early childhood memories is of my paternal grandmother Miriam preparing dishes such as butter chicken for her grandchildren. I remember sitting at the table, eating butter chicken, and her recalling how King George VI visited South Africa in 1947 and how she and my grandfather scrubbed all their kids and bought them new outfits and new shoes to see the King, his wife and the princesses Elizabeth and Margaret as their horse-drawn carriage weaved through central Johannesburg. My father who was 6 was very upset as he thought they were all coming over for dinner! Like many of my grandfather’s generation, they felt a close affinity with the Royal family.

The modern South African Indian community is largely descended from Indians who arrived in South Africa from 1860 onwards from colonial British India.  Approximately 200,000 Indians arrived as indentured labourers over a period of 5 decades and by the 1890’s others arrived as British subjects and worked as traders and labourers. Whilst they were denied many rights under apartheid, over time they built a strong community and are a part of the modern fabric of South African society. Osman at 17 with his paternal grandmother Miriam.

South Africa shed the shackles of apartheid in the mid 1990s and today it is a vibrant country also referred to as the rainbow nation, referencing the diversity of cultures found there; from the descendants of early European settlers including the Dutch (Afrikaners), the English and Portuguese, to the Indians, Cape Malays (descendants of Indonesian/Malaysian slaves) and rich indigenous African communities.

Each wave of new settlers brought their own tastes and influences and added to the countries already rich culinary scene. Today new waves of settlers from the Middle East and Asia add to the diversity and vibrant food scene of the nation.

Over time many traditional Indian dishes that Gujarati families had brought with them were influenced by local palates to include more vegetables, lighter spice, less oil and became lower in fat with more use of yoghurt.

Originating in Northern India, Butter Chicken, or Murgh Makhani, includes chicken mixed with spices, cream, tomato and butter. With waves of Indian migration in the post-colonial era, the dish travelled far and wide and soon became a popular item in western countries with an Indian diaspora.

My mum would often prepare this traditional Indian butter chicken with uniquely South African influences when we were younger as it was quick, easy and delicious. It rekindles memories of dinner around the family table with parents and siblings.

I moved out of home at 18 so when I see or hear of butter chicken it sends me on a trip down memory lane. It is also now a favourite of mine to prepare for my own family. I’m not the best of cooks but this recipe is easy to follow.

Preheat the oven to 190C / 375F and spread the cauliflower florets and sliced carrot onto a baking sheet. Lightly coat with olive oil and season with salt & pepper. Bake for 30 – 35 minutes until cooked through and starting to brown around the edges.

In a large skillet with high sides or a Dutch oven, heat about 2 tablespoons of olive oil and fry the onion until it’s softens and starts to brown, about 5 minutes.

Add the garlic, ginger and spices and fry for about a minute.

Add 2 tins of tomatoes and season generously with salt. Cook this sauce for about 20 minutes until it starts to thicken.

Add the beans and chicken and cook for about 10–15 minutes until the chicken is cooked through. Place a lid on for about half of this cooking time which keeps the moisture in the sauce.

By this stage, the cauliflower and carrots will have come out of the oven, so add this to the curry and stir through. Let this cook for a few minutes.

Add the yoghurt and stir through. Add a little extra if you want it creamier.

Finally, add a squeeze of lemon juice (this is entirely optional) and a small handful of roughly chopped coriander. Serve with whatever accompaniment you want, usually white rice with another dollop of yoghurt and a sprig or two of coriander (if you like it as much as I do).