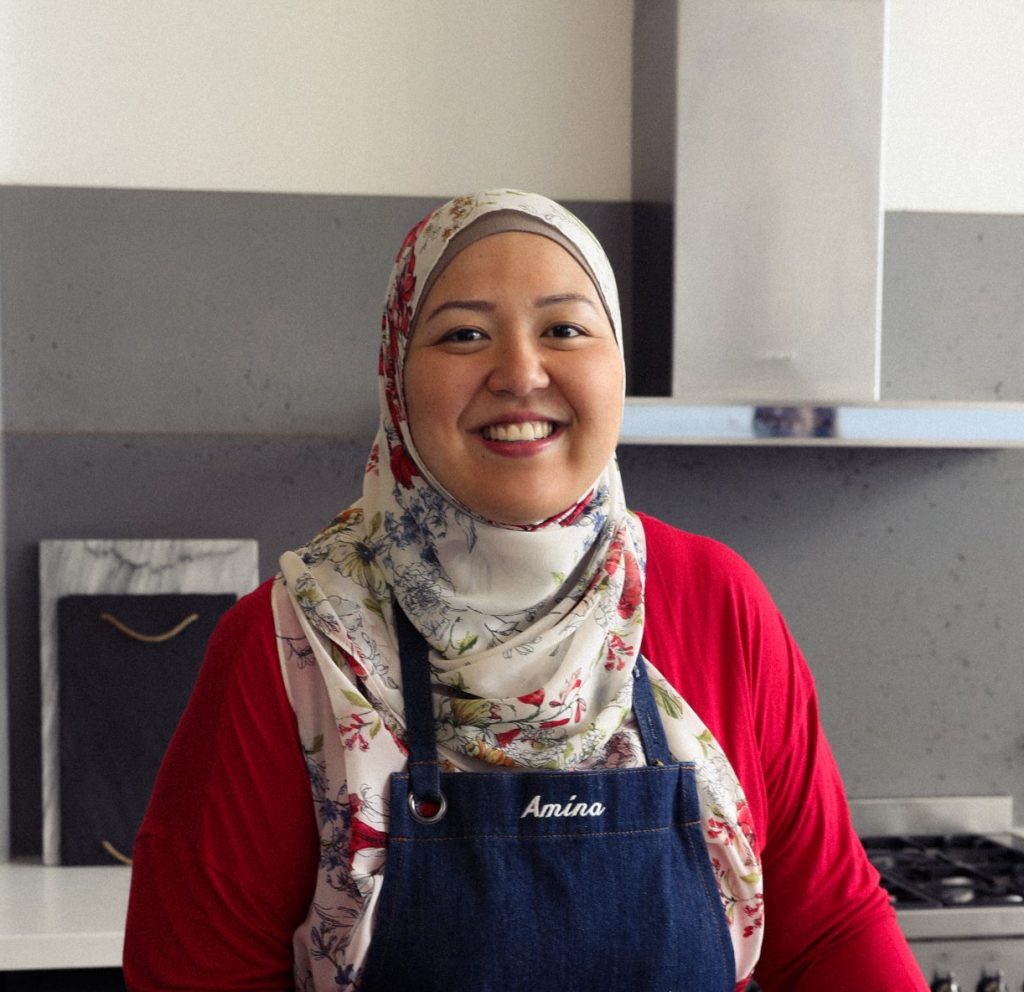 Amina El Shafei is a paediatric nurse, wife, mum and passionate cook who loves travel and exploring different cultures. A MasterChef Australia Season 4 contestant in 2012, she was invited back for Season 12 in 2020, MasterChef Australia: Back To Win. Featuring high-achieving contestants from the previous 11 series, it premiered on April 13th, a month into Australia’s first COVID-19 lockdown. Her cookbook ‘Amina’s Home Cooking’ is an homage to the Egyptian and Korean food Amina grew up eating.
@aminaelshafei

Taamiyah, the Egyptian version of falafel, is one of Egypt’s much loved street foods.

My father is Egyptian – and my mother is actually Korean. They met in Riyadh in the 1970s when they were both working as expats in Saudi Arabia – my mother as a nurse and my father as an accountant. Their marriage was a mixed marriage which they say was actually quite common at the time when Saudi Arabia was opening up to the outside world and lots of expats and cultures mixed together. Mum is a convert. Islam didn’t really exist in Korea when she was growing up but she learned a lot about it living in Saudi and meeting my dad.

For me, it’s a great privilege having the two different heritages and the opportunity to visit extended family in both countries and I think for my parents it’s been enriching too. Dad does lots of interfaith work and is the lead Chaplain for NSW (New South Wales) Health and for UTS, The University of Technology Sydney.

I love travelling and have been lucky enough to travel to Egypt on many occasions, largely visiting family but also doing the historical sites and travelling down the Nile. Dad’s family come from Alexandria which has a fascinating history and mix of cultures: from ancient Egypt (pharaonic) to Greek, Italian, Turkish, French and British.

I have fond memories of the taamiyah sellers wandering through the suburban streets of Alexandria in Egypt calling out to the residents in the morning. The carts would be topped with a large pile of freshly cooked taamiyah, soft flat bread, an assortments of pickles and both tahini and chili sauces. I could sometimes pick out if I was nearing a taamiyah stall because the scent of the deep-fried spices and aromatics would drift through the streets making me so hungry. Although cheap, relative to other street foods taamiyah certainly keeps the hunger at bay with great flavour and texture.

It also poses the endless argument of which version is better: taamiyah or falafel?

To explain the differences in more detail, falafel is the Northern Middle Eastern version predominantly made of chickpeas and gently flavoured with aromatics and spices – creating a light-coloured interior. Taaimyah, on the other hand, is unique to Egypt and has a famous vibrant green interior as it is made from fava beans, heavily seasoned with aromatics and spices and usually blended with a good amount of fresh coriander and parsley. The common spices are ground cumin and ground coriander and the common aromatics are garlic and onions.

Unfortunately, I was never able to learn my grandmother’s recipe but my recipe is based on my memories (sight, smell and taste) of the commonly made taamiyah I’ve had in Egypt. I’ve tweaked the recipe many times to get it just right.  My father tells me that it tastes very much like what he used to enjoy back home – and that’s good enough for me. 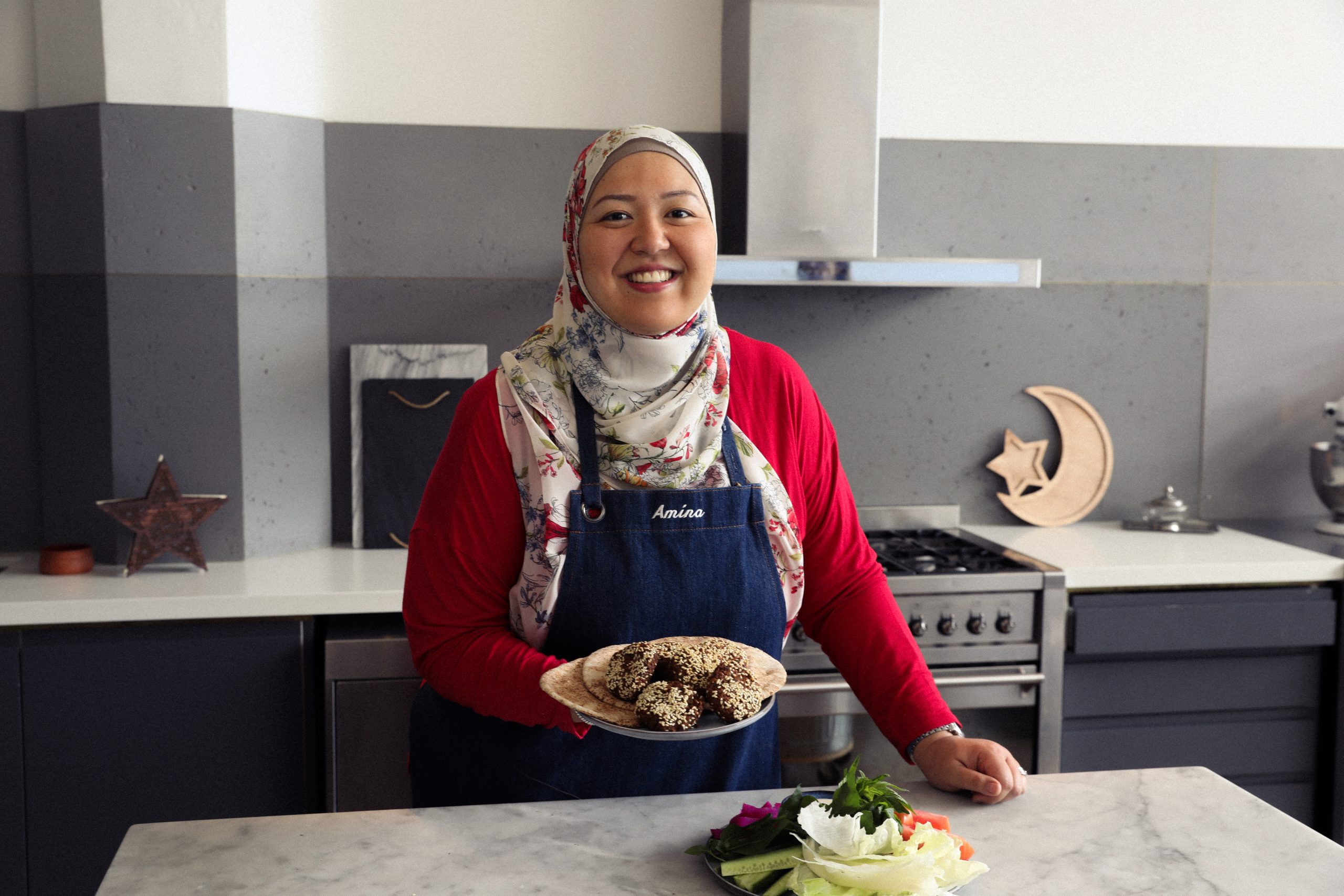 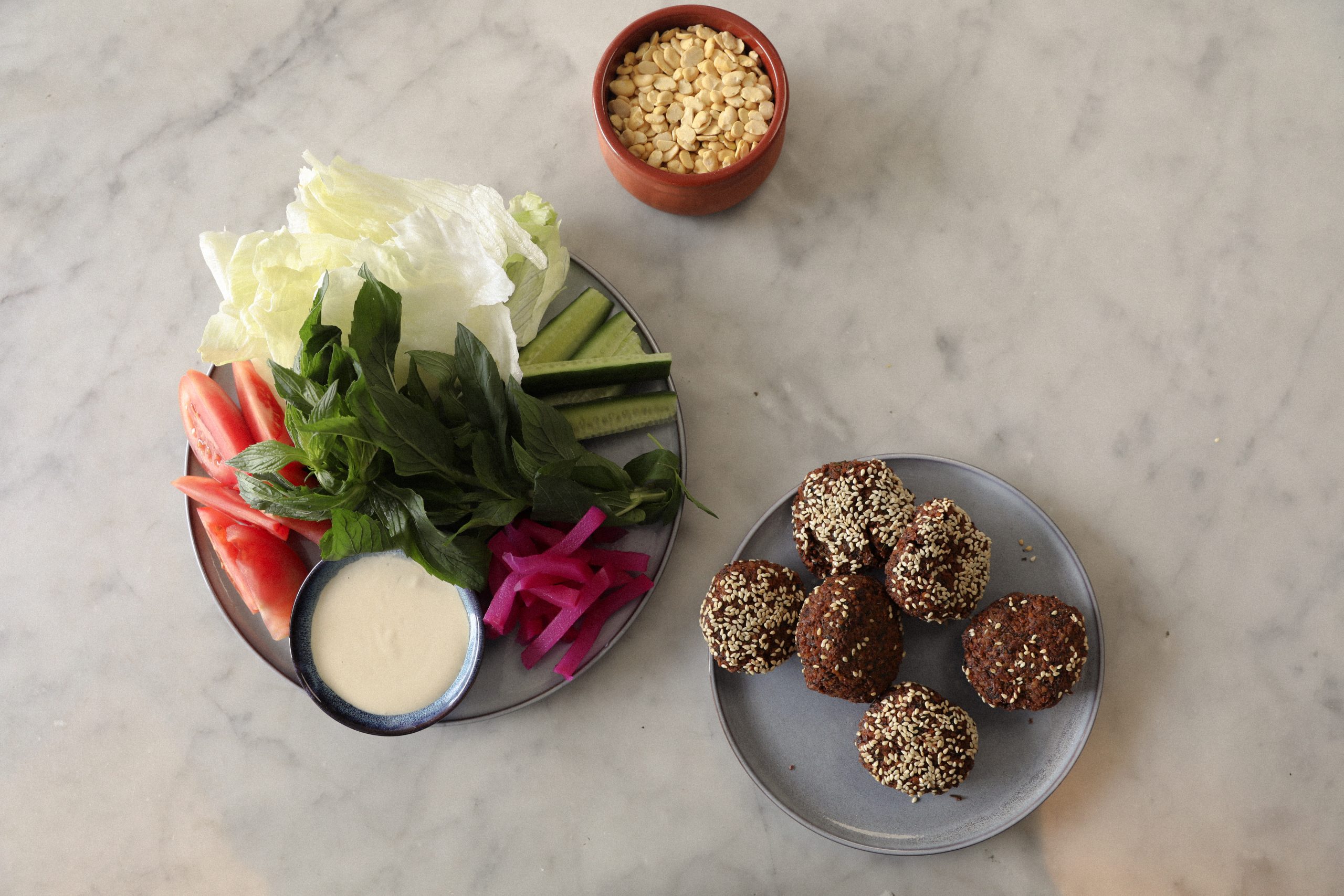 Soak the dried and peeled broad beans in tepid water overnight or for a minimum of 8 hours. After soaking, drain and rinse them well until the water runs clear then allow to drain off for an hour to ensure as much water is removed.

Place the drained beans and the rest of the ingredients except for the sesame seeds and vegetable oil in a food processor and blend until the mixture is a fine grain-like consistency that is vibrantly green but wet enough to mould. Transfer the mixture to a large bowl and place in the fridge for 1 hour. This will help set the mixture to make it easier to shape the patties. *

Whilst the taamiyah is in the fridge, make the tahini sauce by blending all the ingredients using a whisk or a hand mixer until it forms a smooth but thick sauce. Season with salt to taste and leave in the fridge until ready to serve.

Prepare all the vegetables for serving and leave refrigerated.

Heat vegetable oil until it reaches 160C. Using 1 tablespoon of the mixture at a time, carefully shape each falafel into a patty about 1.5cm high, then gently press one side down into the raw sesame seeds.

Slowly place into heated oil and cook for 3-4 minutes turning once until the taamiyah is golden brown and crunchy. Remove the falafel with a slotted spoon and drain on a paper towel. Repeat the process until the mixture is used up.

Serve the falafel immediately with flatbread, tahini sauce and salad. 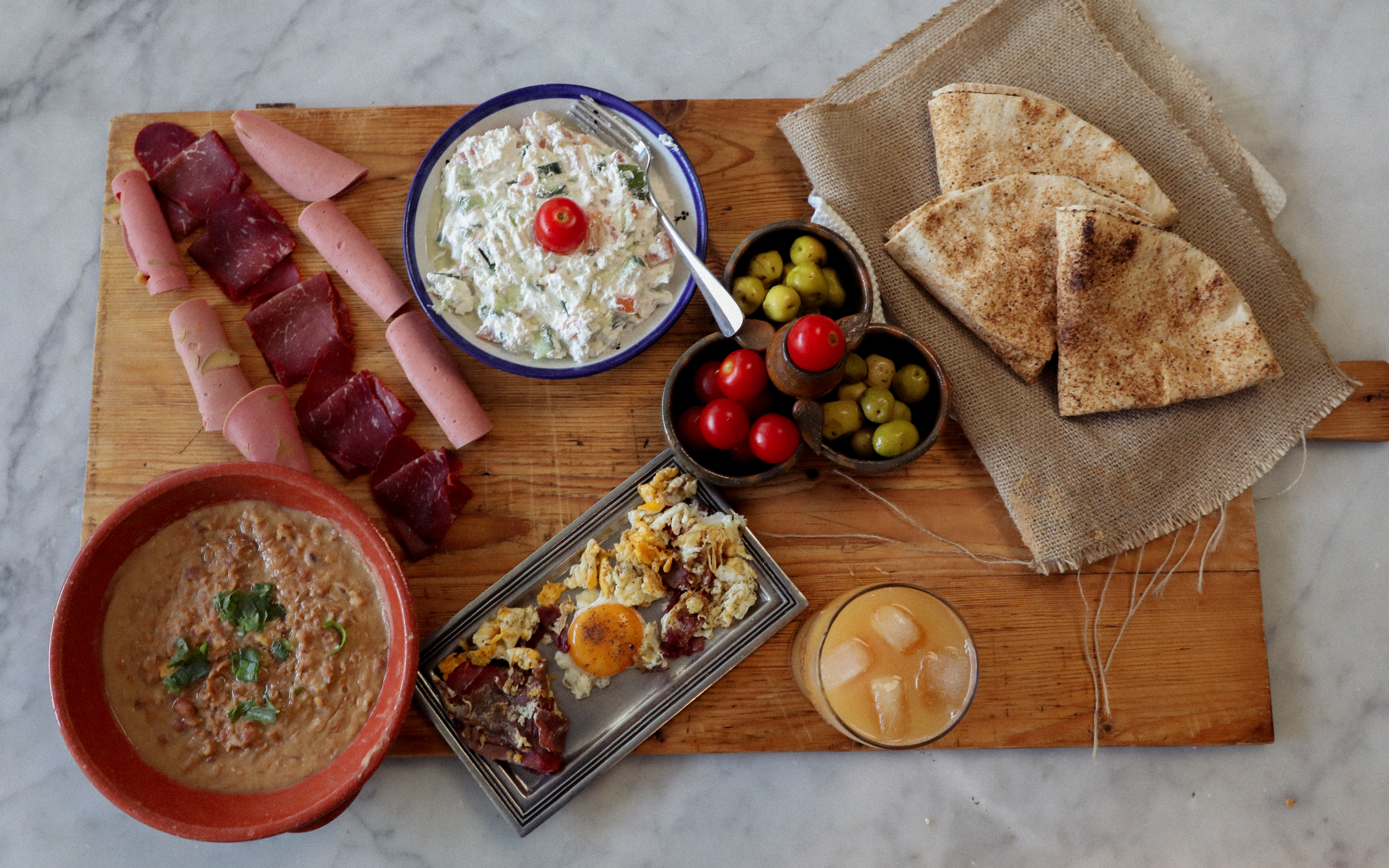 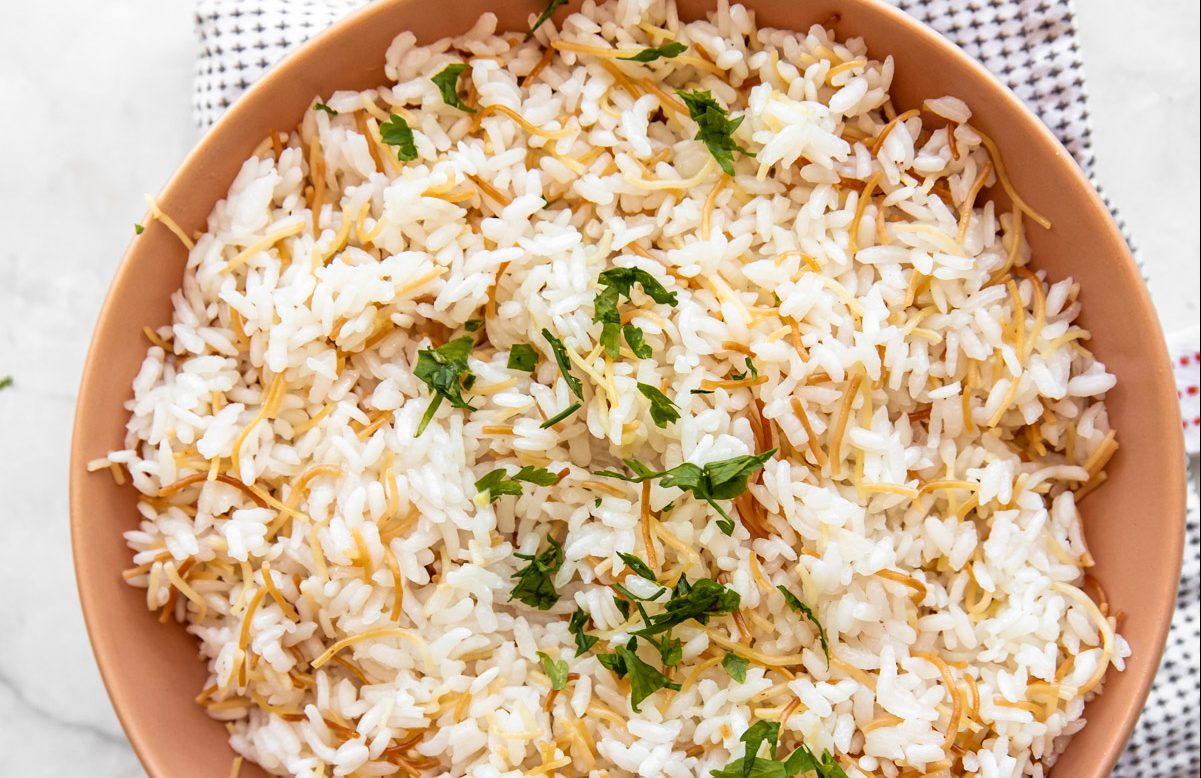