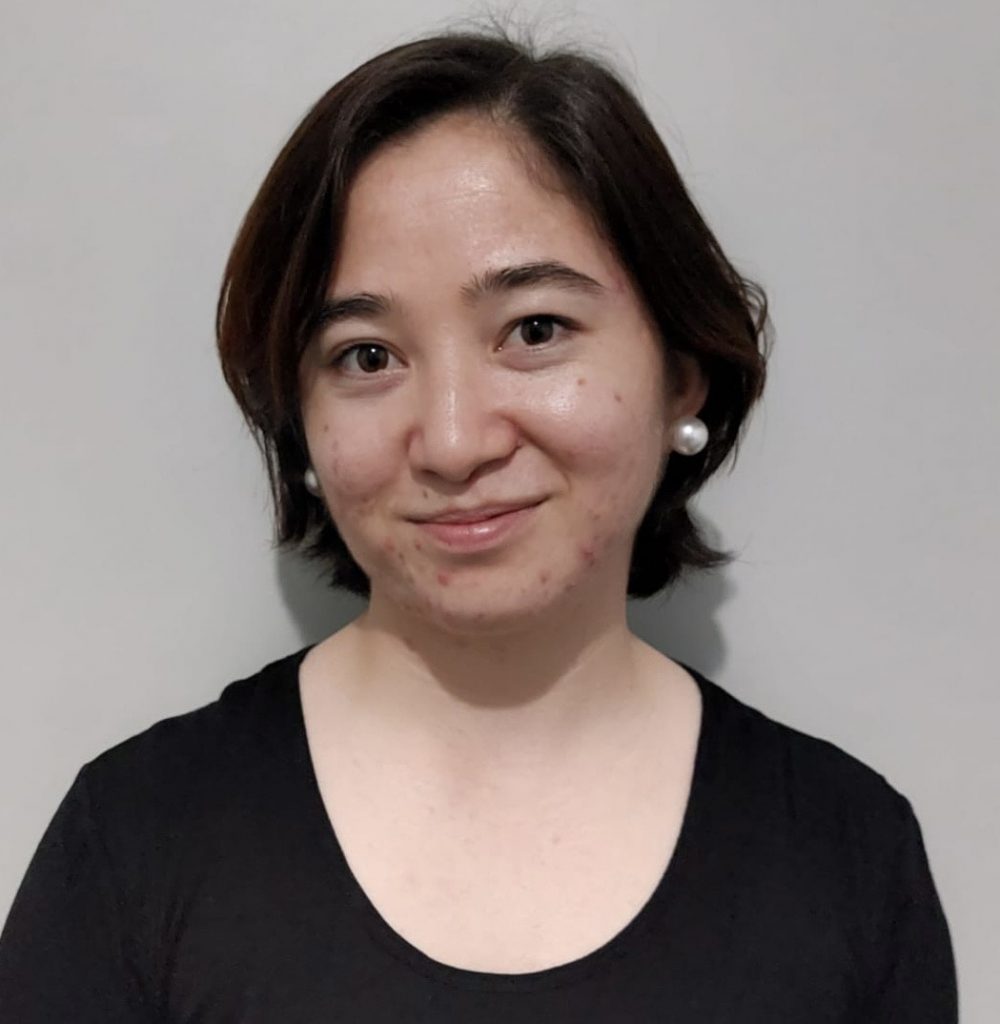 Farukh Tahery was born in 1996 during the civil war in Afghanistan. Her family is from Ghazni province in south-eastern Afghanistan, one of the oldest provinces and a historic and commercial centre. They were evacuated to Sydney, Australia when the US and western governments pulled out of Afghanistan and the Taliban resumed power.

I am Farukh Tahery. I was born in 1996 during the civil war in an educated middle-class family in Ghazni province, one of the eastern and oldest provinces of Afghanistan. My father (Assadullah Taheri) is a medical doctor in Sardar Mohammad Dawood Khan hospital and my mother (Husnia Taheri ) was a teacher. She taught for 30 years in a girls’ high schools in Kabul and in Ghazni province. Sadly, I lost her 12 years ago when I was just 13.

The city of Ghazni, the capital of the province, is very historic and was once the capital of Afghanistan. It is on the main highway between Kabul and Kandahar, about 140 kilometres south of Kabul. It is an important commercial and industrial centre famous for livestock, agricultural products, furs and silk. On the banks of the Ghazni River, Ghazni is thousands of years old and Afghanistan’s only remaining walled town. It has a high 13th century citadel in the middle and cultural heritage sites like the Citadel, the Minarets and the Palace of Sultan Mas’ud III have attracted visitors and archaeologists for centuries. In 2013, the Islamic World Educational, Scientific and Cultural Organisation (ISESCO) named Ghazni the Islamic Capital of Culture. It was captured by the Taliban on the 12th of August last year.

My family comes from Jaghatu, which is one of the largest and most populated districts of the Ghazni province. It is about 20km north-west of Ghazni city and is famous for its agriculture and its apples. The majority of people including my family are Hazara.

I spent my childhood in a village in the green nature of Ghazni province, where all the Taheri family (my uncle, aunt, grandmother and grandfather) lived together. Life in the villages was hard. There wasn’t electricity and plumbing in every house and there was no real transportation which made it hard to get to school, which was far away. There also weren’t any shopping centres or health centres so people had to travel long distances to see a doctor. And life for women was hard because in addition to housework, they also had to do farm work.

Although life in the village was a bit difficult, all of us Taheri family are intimate and very close to each other and I will never forget the times when my mother ​​and my aunts all worked together to cook Bolani and other traditional food. Making Bolani, they would bring the vegetables and other ingredients fresh from nature. Bolani was sometimes baked in the oven and sometimes cooked in the pan. We were so happy to work and play around them. When I was six or seven years old, I remember being allowed to play with a piece of dough to make one piece of Bolani. When I was a teenager, I became responsible for preparing the vegetables. Now I am responsible for the deep frying. 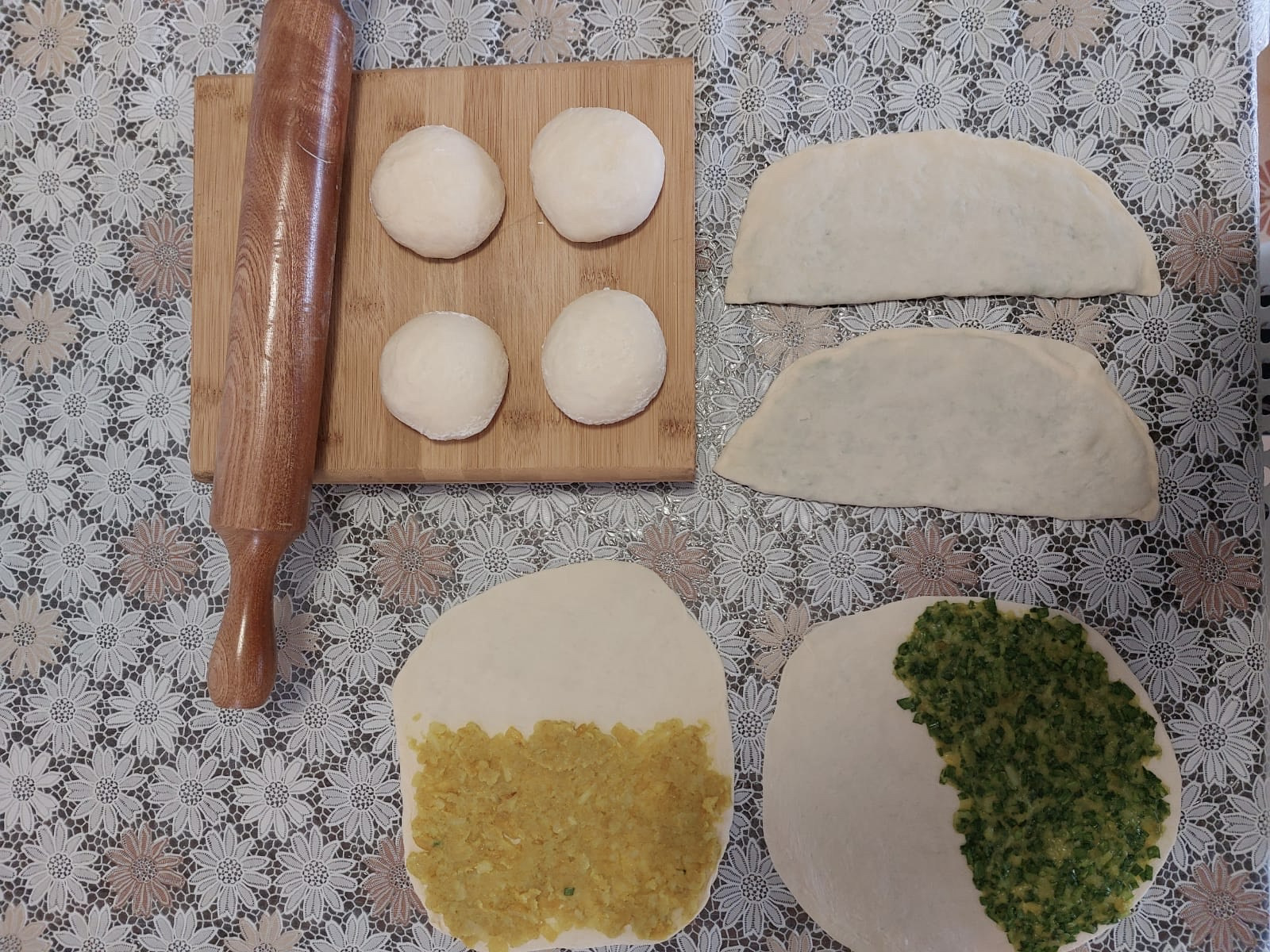 Bolani is an Afghan flatbread stuffed with potato, spring onions and green peppers and shallow fried. It is very easy to make and is one of the most popular dishes of Afghan people. It can also be filled with pumpkin or sweet potatoes, red lentils, spinach, leeks or just chives. This simple and delicious food is usually served with green chutney and garlic mint yoghurt and eaten as an appetizer, a side dish or a snack with a cup of tea. Bolani is served on many different occasions and times including during the holy month of Ramadan at iftar.

During Ramadan, for iftar, there is always Bolani, Sambosas, Ashak (Afghan dumplings), and sometimes different soups like chicken soup or vegetables soup served alongside the main dish on the iftar table. And Sher Birinj (an Afghan rice pudding) to follow.

Ashak is a local Afghan dish made from pasta dough and gandanz (the Dari word for chives). It is a bit like the Korean dish mantu.

When we were small, we did not fast but we were impatient for iftar because the whole family would sit around the table together. Everyone raised their hands to pray and after praying they broke the fast.

My father always said that Ramadan is the month of kindness and the month of mercy. It was hard for me to understand these sentences when I was really young but now that I have grown up and now I am fasting, I experience that beautiful feeling. Ramadan is a month of patience and the month to train yourself to do the best you can for others because we should all be kind to each other, respect each other, not hurt anyone and help all people who are in need.

I finished my schooling in Rabia Balkhi Girls’ School in Kabul. Fortunately, I was among those girls who were able to follow up their school continuously without any stop or break, but most of the girls could not go to school for several years due to the war. They started again after the war but unfortunately the girls’ schools are closed by the Taliban right now.

In 2013, I entered the University of Economics where during my studies, I worked in the field of gender and peace building which was and is an important issue for Afghanistan.

After graduating from university, I worked as a financial officer in a private school, and then in recent years, I have been working as executive manager at the Afghan Ministry of Finance but with the arrival of the Taliban, women are no longer allowed to work in the office so I could not continue my work.

My brother’s fiancé worked for the Human Rights Commission of Afghanistan. My brother worked with victims of domestic violence and my sister, following my mum’s example, was a teacher in a girls’ high school in Kabul. 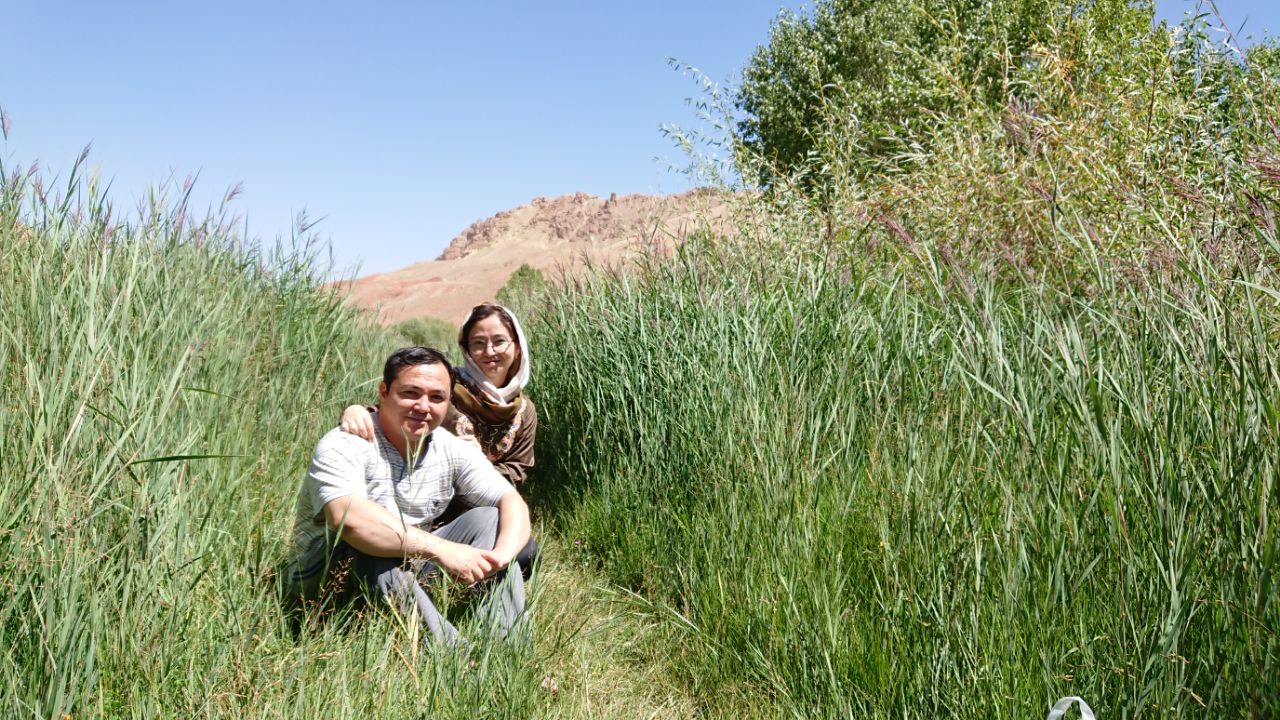 In recent years, Afghanistan had been getting better because both men and women were present in the community together. Women had the right to vote, work and study. They knew their natural rights and they worked hard to get them. The Taliban have returned Afghanistan to what it was 20 years ago which is really unfortunate.

I am now in Australia with my family away from suicide, war and bloodshed. Everything here is a new experience for me, and this year is the first Ramadan we are in Australia.

I am hoping for a better world for all human beings. 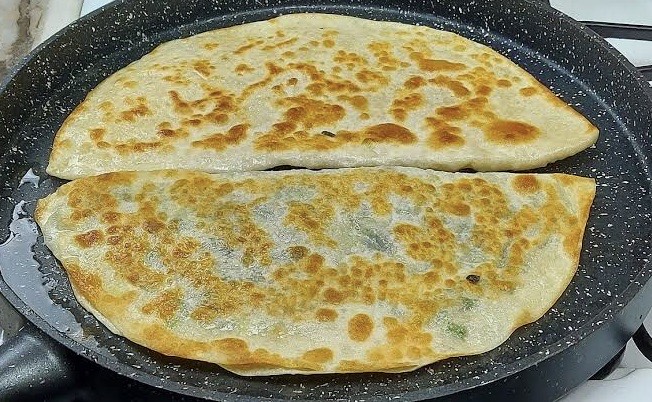 Farukh’s Afghan Bolani
Ingredients
7 cups of all-purpose flour
1 teaspoon of salt
1 spoon of sourdough starter
One and half cups of water
One chopped onion (brown or red)
One kilo of Scallion (chives), the white and green parts chopped
4-5 medium sized potatoes
Three green chilies, chopped
A teaspoon of black pepper
A teaspoon of salt
Oil as needed
Follow these steps
Step 1

To make the dough:

Combine the flour, sourdough and salt in a bowl. Now add water and stir together to make a homogeneous mixture. Once the dough starts to form, you can add a little more water as necessary but the dough shouldn’t be too sticky. You don’t want it to stick to your hands.

Knead the dough well and cover it with cellophane (called cling film or glad wrap in Australia). Let it rest for 20 minutes.

Boil the potatoes. When they are cooked, leave to cool then peel and grate them. Chop the scallion (called gandana in Dari).

Now pour two tablespoons of oil into the pan and heat up on the stove top. Add the green chilies and chopped onion into the pan and cook for about 2 minutes until softened a little and slightly browned.

Remove the pan from the heat and add the grated potatoes, chopped Gandana (scallion), salt and pepper and mix together.

Take the dough out of the bowl and divide it into 10 equal parts. Form into balls.

Sprinkle a little flour onto a board and place one of the ten pieces of dough on it, flattening it into a circle with a diameter of about 20cm. (It’s a little bigger than a Cornish pasty. It doesn’t need to be too exact. Sometimes it is bigger than 20cm depending on the size of the pan and the person that make it.)

Place a little of the prepared filling on half of the dough circle so that these ingredients are one centimeter away from the edge of the circle. (Don’t use as much as you might in something like a Cornish pasty as these are flatbreads.)

Now fold the other empty half of the dough over the half with the stuffing and press the edges of the dough so that they stick together.  You can use your fingers or a fork to do this.

Do the same for the other doughs balls.

Once you have filled all the dough with the ingredients, you need to fry them.  Pour a few drops of oil into the pan and fry both sides of the bolani in the pan.  You can press the bolani with a small wooden spoon while frying them so that they fry evenly. Now Bolani is ready to serve.

Our favourite way to eat this delicious food is with buttermilk, chutney or garlic minted yogurt. 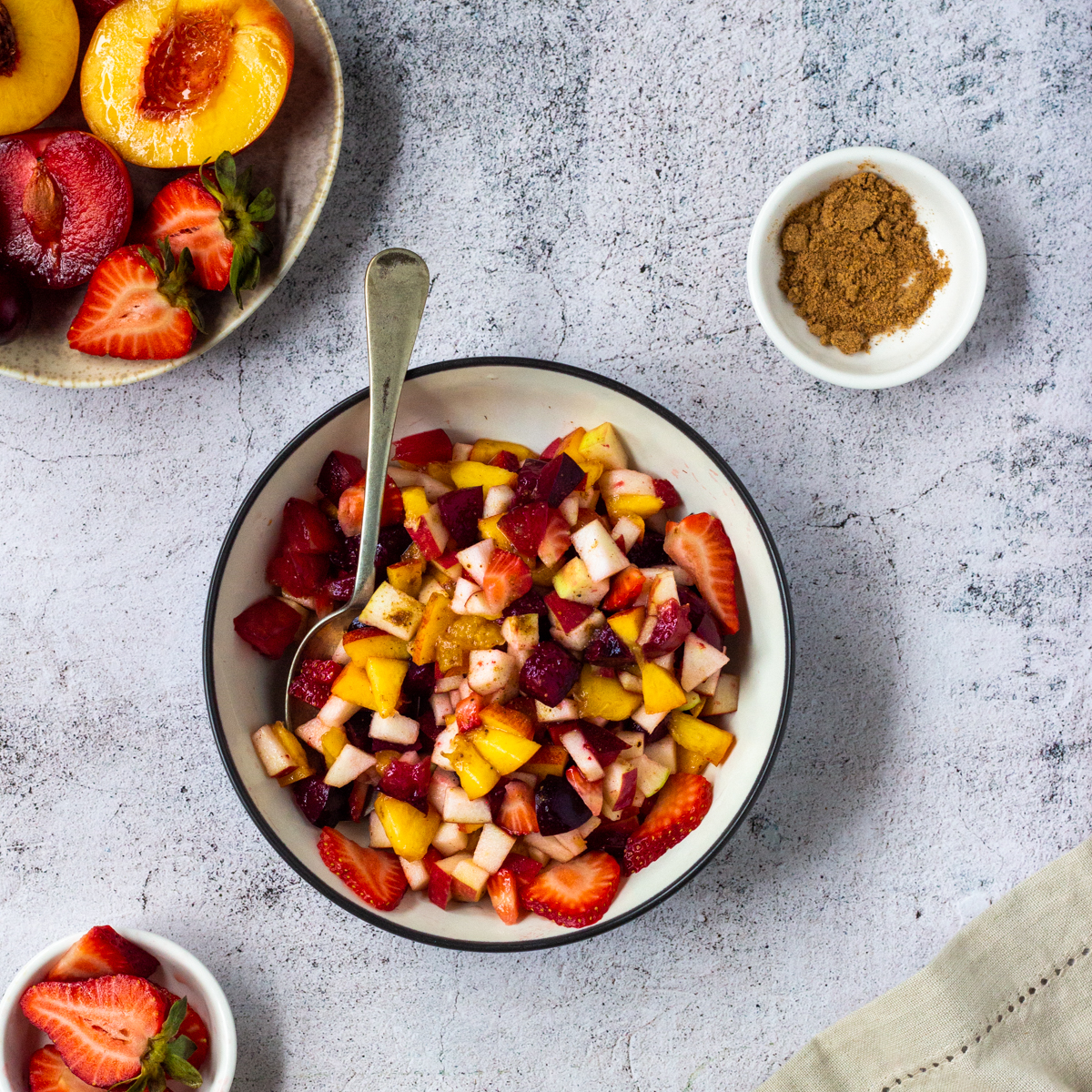